You are here: Home / Search for "Turning up the heat over Herr (AUDIO)"

Search Results for: Turning up the heat over Herr (AUDIO) 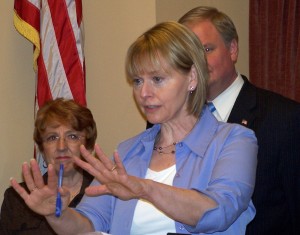 Democrats are trying to turn up the heat on Scott Walker appointees in the Department of Natural Resources. Laura Callison is a homeowner in the Town of Concord next to the site where Herr Environmental has DNR permits to spread human waste from septic systems. She says her once idyllic neighborhood now stinks. “Many days when I walk my dog, the air smells putrid,” says Callison, who says she has not drunk water from her well since 2007. In 2009, DNR staff determined Herr had spread waste at more than three times the level allowed by law. “I’m outraged, and I’m sad, because it’s continuing,” said Francine Langlais, a Town of Sullivan resident who lives near the property. “It has not been stopped. Why?”

The Wisconsin State Journal reported that former state Representative Scott Gunderson, a Scott Walker appointee in the DNR, interceded on Herr’s behalf. That doesn’t sit well with former governor and DNR secretary Tony Earl. “It’s indefensible. When I heard Mr. Gunderson say ‘well, we all make mistakes,’ he ought to ashamed of himself,” says Earl.

Herr had previously been cited and fined hundreds of thousands of dollars, but in this case the violation was referred to local prosecutors instead of the state Department of Justice, which resulted in much smaller fines. “This is not a mistake, this is a well-known polluter, previously cited, previously fined almost a quarter-million dollars,” says Earl. “This is no babe in the woods.” 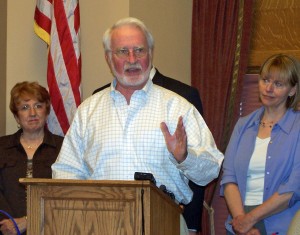 Wednesday’s press conference and hearing were called by Democratic members of the Assembly Natural Resources Committee. “We’ve heard concerns, we’ve heard questions, and we’ve heard a lack of a partnership,” says state Representative Andy Jorgenson, who represents the area where the spreading took place. “I want to get those concerns met, I want those questions answered, and I want that partnership back, with the DNR. We have no future if we don’t have that.”

“There’s a perception that’s trying to be made that  rolling back the department’s ability to be aggressive in enforcing environmental laws is somehow being more realistic,” says state Representative Fred Clark. “That somehow the department was overly aggressive in the past in referring cases to the Department of Justice. I think we need to strongly challenge that.”

“I’ve heard from many of the folks with whom I served in the DNR in the years I was there,” says Earl. “They’re appalled at what’s happened. I sure wish that this story pushes the legislature into action, and I wish that Mr. Gunderson would expunge his shame and leave that office. He has no business staying there any longer.” DNR spokesman Bill Cosh declined to comment on Earl’s statements.