You are here: Home / Search for "Kristen smith"

A woman convicted of kidnapping her infant nephew and leaving him outside in a plastic storage bin in frigid temperatures has been sentenced to 25 years in federal prison. U.S. District Judge James D. Peterson imposed the sentence Monday on 31-year-old Kristen Smith of Aurora, Colorado. Smith was found guilty on July 31, after a four-day trial in U.S. District Court in Madison.

Smith was accused of taking then five-day old Kayden Powell in the middle of the night last February, then leaving the infant in a storage bin behind a gas station in Iowa before she was taken into police custody. The police chief in West Branch, Iowa found Kayden more than a day later unharmed, despite the sub-zero temperatures outside.

At the trial, the evidence showed that Smith faked a pregnancy and kidnapped the infant with the intent to take him back to Colorado and claim him as her child. The jury reached their verdict after less than three hours of deliberation.

In sentencing Smith, Judge Peterson called her a liar and said, “You would have let the baby die rather than admit you had taken him.”

United States Attorney Vaudreuil said, “Kristen Smith left a baby outside in bitterly cold temperatures and for over 24 hours denied any knowledge of his whereabouts. Her callous disregard for this child’s life merits this long prison sentence.” 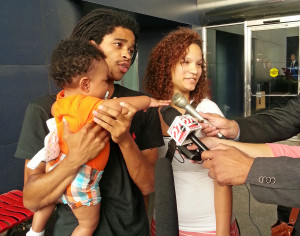 Kayden Powell and his parents were in federal court Thursday for the verdict in Kristen Smith’s trial.

A jury in federal court has found a Colorado woman guilty of kidnapping her newborn nephew from a home in Beloit earlier this year.

It only took the jury in Madison about three hours on Thursday to return a guilty verdict against 31-year-old Kristen Smith. The Aurora, Colorado woman was accused of taking then five-day old Kayden Powell in the middle of the night last February, then leaving the infant in a storage bin behind a gas station in Iowa before she was taken into police custody. The child was found more than a day later unharmed, despite the sub-zero temperatures outside

Smith took the stand in her own defense during the trial, claiming that Kayden’s father had given her permission to take the boy to Colorado and that the parents planned to join her there at a later date. Bruce Powell, the father, denied that had ever happened.

U.S. Attorney John Vaudreuil says he believes justice was done and that the jury returned a “fair and just verdict” in the case.

Kayden was in court with his parents Thursday when the verdict was read. His mother, Brianna Marshall, says “it was like torture all over again” to be in court this week and hear the evidence presented. Still, she expressed relief to have the trial completed. Six months later, she says Kayden is strong, healthy, and almost crawling.

Smith faces 25 years to life in prison when she’s sentenced in October. Her attorney says they do plan to ask for a new trial and will appeal the jury’s decision.

The woman accused of kidnapping a baby near Beloit, and leaving him in the cold behind a gas station, is now facing both state and federal charges.

Smith is jailed close to where she was arrested last week in West Branch Iowa. Authorities took her into custody on an unrelated warrant when investigators in Wisconsin told her to make contact with police, shortly after the infant was reported missing last Thursday morning. She was in custody for more than a day before police found Powell Friday morning, wrapped in blankets and placed in a storage tote behind a gas station.

Smith has been charged in federal court with kidnapping, but U.S. Marshals are reportedly waiting to take her into custody until a federal grand jury in Madison reviews the case and hands down an indictment. 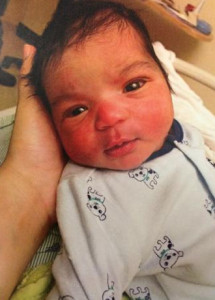 Federal prosecutors have filed kidnapping charges against a Colorado woman accused of abducting her half-sister’s newborn baby from a home in Beloit. The charges against 31-year-old Kristen Smith were filed Friday afternoon, just hours after police found Kayden Powell alive and well in a storage tote outside of a gas station in Iowa.

According to the criminal complaint, a search of her car turned up baby clothing and a stroller, but no sign of the child. Police also found a prosthetic pregnancy belly and emails on Smith’s phone in which she stated she gave birth on February 5th. Smith was taken into custody on an outstanding warrant from Texas.

Kayden Powell was discovered by police just after 10 a.m. this morning, in a blanket-wrapped storage tote behind a BP station in West Branch, Iowa, just a short distance away from where police picked up Smith the day before. Prosecutors say Smith admitted a short time later that she took the infant from her sister’s home, then put him behind the gas station.

If she’s convicted on the federal kidnapping charge, Smith faces a maximum penalty of life in federal prison.